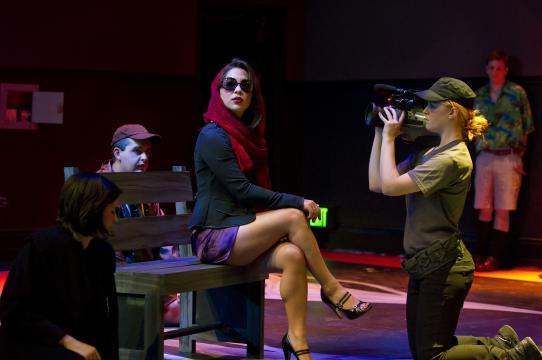 Students interested in directing often begin by taking the directing studio courses offered while serving as assitants on shows.

Assistant Directing
Each quarter the UCSC Theater Arts Department stages 2-3 productions in dance or drama. These shows are directed by a combination of visiting professionals, faculty, and advanced directing undergraduate or graduate students. Students interested in serving as an Assistant Director can contact the director of a particular show directly to request a post. It is entirely at the discretion of the Director to accept a student's petition or not.

If a director accepts a student as their AD, the student will enroll in the production as a class. Serving as AD to a faculty member can fulfill the faculty-directed production requirement for the Theater Arts Major. Grades for student ADs will be determined by a faculty director, or by a faculty advisor upon recommendation of a student director.

The role of a particular AD on a production is determined at the discretion of the Director. Certain productions may have multiple AD's, fulfilling different needs of the production. The duties and responsibilities of an assistant director can range widely, dependent upon the director, the production, and the student's own range of experience and ability. The can include note-taking during meetings and rehearsals, being on-book, running errands for a director, making copies, leading actor, dancer, or singer warm-ups, video editing, dramaturgical work, running lines, etc.

It is highly recommended that a student AD arrange to meet with the Director as early as possible, and at the very least before the first rehearsal in order to determine the Director's expectations and assignments for the AD. The Director may request an AD's presence at auditions and call backs, or even at preliminary production meetings which may take place during the quarter prior to the production, so the earlier the better.

Assistant Directing for Shakespeare to Go
Directed by a Theater Arts department faculty member, Shakespeare to Go is a touring company of UCSC student actors who bring a 50-minute version of a Shakespeare play to the local community during spring quarter. Students may request to be an Assistant Director to the directing faculty member during the course/rehearsal period in the winter quarter, giving them the opportunity not only to observe and assist in directing, but to be a part of a unique rehearsal period that involves editing Shakespeare for time constraints while retaining the essential story in a palatable form for mostly young student audiences. Shakespeare to Go rehearses as a class during winter quarter (THEA 155, which counts towards the faculty-directed production requirement for Theater Arts majors or an upper division studio requirement for majors or minors) and tours during spring quarter.

Chautauqua
Chautauqua is an entirely student-produced showcase of student plays, films, and other works that takes place annually during spring quarter in the Barn Theater. Submissions and proposals are due in winter quarter. More information here.

Barnstorm
Based in the UCSC Barn Theater at the main entrance of campus, Barnstorm is a student-run production company sponsored by the Theater Arts Department. Barnstorm operates one to three quarters each academic year producing student-directed work either as full productions or one-nighters. Directors for full shows and one-nighters will be selected based upon the feasibility of the project, the materials and skills available, the background and experience of the director, the vision of the project as fits into the Barnstorm season, advance work done to prepare for the project, opportunities for students, and how well the project relates to the Barnstorm mission statement. If you are a student interested in working as an assistant director on a Barnstorm show, the process is the same as ADing for department shows: contact the director directly, and they will make a decision. Please see additional information here and/or contact the Barnstorm directors for current deadlines and Barnstorm's current season.

Dharma-Grace Foundation Playwriting Award
In select years the department is able to award the Dharma-Grace Foundation Playwriting Award to a student playwright for a submitted script of exceptional merit. In years when the award is given, the chosen script will be made available to students interested in directing who will then submit directing proposals for the Dharma-Grace show. A committee of faculty will review the proposals and select a student director. This is a separate submission and proposal process from the main student director proposal process, outlined below.

Directing proposals for the department are generally submitted towards the end of Spring Quarter for the subsequent year. A committee of faculty members will review all submitted proposals, and select the student or students who will direct for the department in the coming year. Students will be contacted with the committee's decision, and selected shows will be announced with the specific spaces and quarters they will be produced in. Students may make requests for specific spaces and/or quarters for their production in their directing proposal, though flexibility is very helpful to the committee in trying to plan out the Department's season.

A directing proposal will consist of, at the least, a copy of the script of the play a student would like to direct, an overview of the student's vision for the show, including any particular visions for design, why the department should want to put on the show, and the student's background in directing. Directing proposals must also be accompanied by a letter of support from a faculty member, who can offer support and confidence in both you and your show. Directing faculty in the department generally hold a directing proposal workshop during Spring Quarter, to help prepare students for this process, or answer any questions. You can contact the Theater Arts Department Office for dates, or speak to the directing faculty during their office hours for more information.

Proposals will be selected based on the student's experience and demonstrated capability as a director, as shown in classes or previously directed shows, the feasibility of the department being able to adequately produce the show as envisioned, opportunities for students in the show, and overall quality and relevance of the vision for the production.